In this time of increased political divisiveness and lack of confidence in our congressional representatives to work together and make effective decisions to run the country, finding evidence of compromise on an issue brings hope.

On September 28, 2018 a bill was signed into law that allocated $2.3 billion dollars to be included in the 2019 budget for Alzheimer’s and dementia research under the auspices of the National Institutes of health (NIH) . The congressional members who sponsored the bill included four Republicans, and four Democrats.

Alzheimer’s is indeed the most expensive disease in the country, costing an estimated $277 billion–including $186 billion in direct costs to medicare and medicaid–in 2018. As the number of those afflicted increases, so will the cost. There are 5 million Americans living with Alzheimer’s today; it is predicted this number will rise to 14 million by 2050. With the increase in funding, scientist are able to work at a faster pace to explore ways to reduce risks, develop drugs or other potential treatments to stop or slow the disease.

In 2011 the National Alzheimer’s Project Act (NAPA) was passed which focused on the need for resources for research and the needs of family caregivers with a goal to find effective treatment of Alzheimers/dementia by 2025. Since that time, the federal government has continued to be supportive. The monies allocated to NIH from 2011 to the present have quadrupled, and continue to be spent on research and programs to help caregivers.

Among the many groups that keep congress aware of the need for funding for Alzheimer’s and dementia, one group stands out. Alzheimer’s Impact Movement (AIM), the advocacy arm of the Alzheimer’s Association. The group is very active in keeping our representatives aware of what is needed to help those afflicted with Alzheimer’s and those who care for them, as well and working with government agencies that oversee the research and programs that impact dementia and Alzheimer’s.
AIM federal goals are:

Increase the Commitment to Alzheimer’s Research

State policy is also vital to the work that the Alzheimer’s Association is doing to meet the needs of individuals living with Alzheimer’s and their families. State officials determine regulatory and statutory standards for dementia training, control spending on state respite care dollars, designate spending for state long-term care services, and control Medicaid spending which can affect eligibility and scope of benefits – all of which can have a direct effect on families impacted by Alzheimer’s disease.
AIM state goals are:

Educate the public about risk reduction

Aim was very active in the last election and seeks volunteers on a continuous basis to meet with local representatives, engage on social media, coordinate events, draft ‘letters to the editor’ or assist in other ways to bring awareness to the effects of Alzheimer’s.

To find out more about AIM or learn how you can volunteer go to alzimpact.org

Only 1% of dementia cases can be cured with treatment. These types of dementia usually evolve as a side affect from conditions such as an operable brain tumor, vitamin B12 deficiency, thyroid disease, hydrocephalus, alcoholism or depression. All other types of dementia are rarely reversible.

Vascular dementia, which occurs in about 10% to 20% of cases, often results from a series of small strokes that destroy brain cells or from deposits of amyloid protein on blood vessels which cause them to rupture. Symptoms may include paralysis on one side, incontinence, and a mask like expression. This type of dementia is usually brought about by chronic high blood pressure, diabetes or coronary heart disease.

Lewy Body dementia accounts for 5% to 15% of cases and is caused by deposits of alpha-synuclein protein throughout the brain. Those with this type of dementia have memory loss symptoms the same as Alzheimer’s in addition to motor problems similar to Parkinson’s disease.

With Alzheimer’s disease, the most common type at 60% to 80% of the cases, the damage to the brain is more severe and ultimately affects larger regions. In the Alzheimer diseased brain,  nerve cells (neurons) stop functioning, lose connections with each other and ultimately die. The death of many neurons in key parts of the brain causes those areas to atrophy and shrink.

The strongest theory for the cause of Alzheimer’s disease is based on the presence of amyloid plaques and neurofibrillary tangles in the brain of patients. Researchers still can’t say, though, whether they are a cause or byproduct of the disease.

Amyloid plaques are a mixture of of abnormal proteins and nerve cell fragments that develop in the tissue between nerve cells., They are formed when the amyloid precursor protein which is part of the nerve cell membrane is broken down by enzymes when a nerve dies. One of the enzymes, beta-secretase, cuts the protein into a piece, the plaque, which is insoluble. This piece is toxic and eventually causes other nerve cells to die.

Neurofibrillary tangles are formed when a protein called tau becomes twisted. Tau plays an important part in the internal support structure of microtubules. In healthy neurons, microtubules act like railroad tracks carrying nutrients from cell to cell. When tau becomes twisted, it disturbs the function of the microtubules which, in turn, affects the communication within the nerve cells and leads to their death.

Another discovery characteristic to Alzheimer’s disease is the reduction of cholinergic neurons in the brain. These neurons, prolific in the hippocampus and cerebral cortex, produce acetylcholine, a neurotransmitter critical to memory and learning. As the disease progresses, acetylcholine levels drop dramatically and the dementia worsens. Levels of other neurotransmitters such as serotonin, norepinephrine also drop which have a direct affect on patient behavior. It is thought the reduction is due to brain cell death.

Welcome to my new, redesigned blog space. Some of you might have followed my original blog about my mother and her journey through dementia. Others of you may have just discovered my site.

Since my mother’s death, and inspired by her, I have been working toward two goals. The first, at the urging of many, I have taken my blog writings and expanded them into a book. My purpose remains the same: to share my mother’s experience in the hope that it will help others. During the course of writing my blog, I spoke with others and received messages from people from all over the United States and even a few from other countries. Universally they had the same reaction “That sounds just like my mother(or whomever). I know what it’s like.” By offering my book on Amazon I hope to reach more people.

My second goal was to learn as much as I could about dementia and Alzheimer’s Disease. Public awareness of dementia has grown by leaps and bounds and medical researchers and other scientists are discovering more about it each day. Though I have gained much knowledge about it, my goal has become never ending.

My purpose for this site is to share some of what I have learned and information I have gathered from my study of dementia. There is a phethora of information out there on the web, and sifting through it all can be daunting. I don’t claim to be a medical professional or psychologist; I will leave the technical explanations up to them. What I will do is refer you to articles or web pages for more in depth knowledge. My plan is to write every two weeks about some aspect about dementia. In addition, I would like to see this web page as a place to share information and serve as a community forum for those whose lives are or have been touched by dementia. I will share names of organizations that are advocates for dementia or Alzheimers, as well as sites to go to for up-to-date information about the disease and help for caregivers. Anyone else who wishes to contribute something that others would find helpful will be encouraged to do so.

Now available on Amazon.com and BarnesandNoble.com 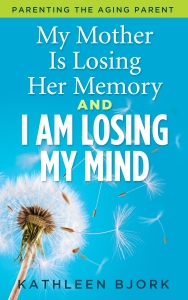